Guess who is a
serious contender? 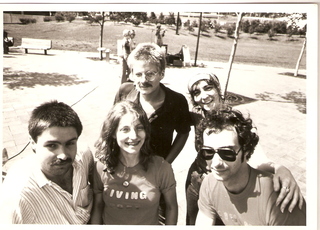 
Two tubists and 50 poets and poetry-lovers participated (including the Mayor of Cincinnati, Jerry Springer).

We began the reading in the lobby of Skywalk Cinema, then moved to Hair Surgeons, a partyboat full of kite-flyers, the riverfront (as part of the Cincinnati Symphony Orchestra's Riverfest), and Gulliver's Bookstore. We concluded at Hyde Park Square under the windows of WEBN radio, with a reading of John Cage's work accompanied by the Cincinnati Symphony Orchestra's Michael Thornton on tuba.

The reading was sponsored by fourteen businesses and commemorated by Cincinnati City Council in an official proclamation signed by Mayor Springer.

We hoped to make it into the Guiness Book of World Records, of course -- but Guiness didn't have a listing for such an event, and said we would have to prove it had national signficance. Like the World's Biggest Ruberband Ball, right. Which is why my home archives include additional photos, handbills, newsclips, radio and TV scripts, and the city proclamation -- documenting it all.

I took a proprietary interest because I handled the publicity, stayed awake to supervise every minute, and dreamed this up in the first place. I was hoping to increase participation in the writing workshops we all had going (thanks to Art Schilling and the Comprehensive Employment & Training Act).

My personal agenda: I wanted to win some poetry converts -- to win over people who hadn't seen a poem since high school and didn't like that one.

I was thrilled when a mailman and nurse wrote their first poems and read them on the spot, and Kenneth Koch's mother confessed that she was reading her son's poetry in public for the first time.

I thought that was funny, considering who she said this to. But the most exciting moments for me came in a doctor's office and a White Castle -- where we were treated to the World's Longest Poetry Reading on Muzak.

Note: The WLPR was an obvious sequel to "The World's First Tuba Week", which I had put together the previous year as General Manager of Pro Musica of Cincinnati, a chamber orchestra.

Will try to bring you updates sooner or later.
Don't hold your breath.

It took me 29 years to follow up on THIS.