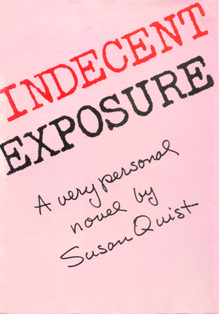 "I never meant to get married. I wanted to be famous..."

I wanted to send the galleys to John, but I felt for Yoko, so I sent them to her, and she sent me this mailgram. And I never heard from her again. But that's another story.

Susan Quist keeps us in a continual present, with a constant sense of self, carefully examining the past according to how she is now. In her novel, the protagonist makes films with the same vital sense one finds in the story itself. "It was physical, like dancing. I had to move around to get my shot. I liked the way I could be standing a block away from someone, but with the camera, I could look into his eyes like they were right in front of me. I could fill the lens, the screen, a whole wall with just a caterpillar." Only the finest fiction has this quality. Not the dull chronology of life, but rather its essence made real...

Indecent Exposure shows that the best part about describing sex is using one's imagination to help do it… Quist's novel is as socially pertinent as Jong's [Fear of Flying], plus a lot more.

I am still in the afterglow of reading Susan Quist’s Indecent Exposure… This novel came in the wake of Erica Jong’s Fear of Flying, and as a narrative and celebration of a woman finding and defining and indulging in her sexuality, it should be at the top of the reading list. It also belongs with Richard Brautigan and the other counterculture classicists—we can call them that now. And...Quist’s only published novel should be considered late Beat, too, for much of the dionysiac power and liberties of her writing come from another time.

[H]er verse is better read aloud, especially its incantatory passages (“Nude the Obscure / Nude Before/Nude After / Nude with Shadow / Nude Crossing the Delaware”[9]) and, of course, by her. It still has its in-your-face edge, even as Indecent Exposure, however, you can still read that to yourself.

I suggest doing it in bed, for reading Susan Quist is sleeping with her. There thirty years may have passed since her novel was published, but they have passed well for what was even in 1974 an opened time capsule to another time. For me, though, it is like throwing back fresh sheets or, better yet, Indian prints. I don’t know why. Perhaps I miss and missed this time that is alive in Susan’s novel.

Under Exposure: A Note on the Work of Susan Quist.

IF YOU MISS THE 60s--
OR WONDER WHAT YOU MISSED--
YOU WON'T WANT TO MISS
INDECENT EXPOSURE.